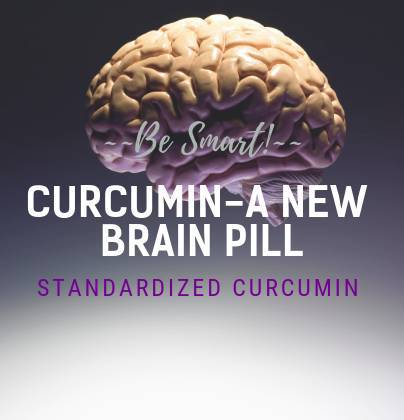 Healthy life requires a healthy brain at all age levels.

The neuronal tissue of the brain and its blood vessel network are exposed to the same inflammation and free radicals oxidative damage that endanger other vital tissues and structures of the body.

Curcumin is the new promising active ingredient that may help in fighting neuro-degeneration and age-related threats to brain health and helps to preserve youthful cognitive function, memory, and learning.

Curcumin is the powerful anti-oxidant active component from Turmeric (Curcuma Longa) root extract that has been proved to have anti-inflammatoryactionthat also support and protect the brain against various degenerative diseases .1-9

For example, studies done on human subjects, showed that taking a daily dose of 1,000 mg of bioavailable Curcumin has been proved to be more effective in improving mood-related symptoms than placebo and also reduced the symptoms of anxiety among a group of obese subjects with depression and anxiety.

Various clinical studies and laboratory trials show that Curcumin is able to stimulate the production of brain-derived neurotropic factor (BDNF), vital to retaining cognitive and memory skills and is involved in creating new connections between brain cells, the so called brain plasticity.

Based on bio-availability and potency, various types of Curcumin extracts are already benefiting of the hype as a powerful health-promoting nutrient.

Now may be just the right time to add it to your brain-health daily protection supplementation.